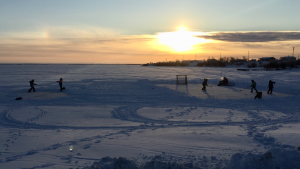 In 2016, after extensive consultation and discussion among its leadership and community members, Northlands Dënesųłiné First Nation (NDFN) published a Sustainable Development Strategy[1].

Recycling and waste management to date

The Northlands Dënesųłiné First Nation (NDFN) has a little over 1,100 members. Its main community is situated on reserve land on the north shore of Lac Brochet and has approximately 1,000 residents.

Most of the waste generated by this community is transported to a waste collection area on provincial Crown Land approximately 2 km north of reserve land. Before the start of this project, there was not a systematic or comprehensive approach to recycling in the community. There is no consistent system for how people make their trash available for collection and there are no standardized residential collection containers.

Approximately 30 derelict heavy vehicles are located on reserve area in a field just south of the community adjacent to the Band’s Public Works Garage. With the recent increase in capital and infrastructure projects in the community, some effort has been made to clean up this area. 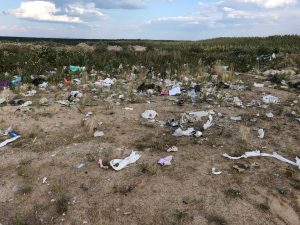 Some improvements were made to this area during the current project, but more remains to be done.

The primary problems with the Current Waste Collection Area prior to the start of this project included:

Although there a number of waste and recycling challenges in Northlands Dënesųłiné, there are strong reasons for optimism. 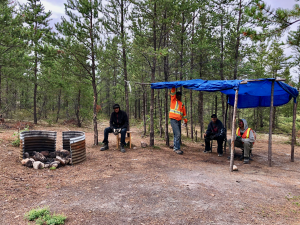 The Crew At A Cleaned Up Camp Site

This project was initiated in Summer 2017 by NDFN Chief and Council in discussions with members of the Boke Consulting team, as a means of implementing the priorities and strategies for waste in the Sustainable Development Strategy.

An application was made in 2017 and funding was committed by Indigenous Services Canada.

All were trained on the basics of safe work and separating recyclables. The Cleanup Crew began by working their way systematically through the community, cleaning up litter and other small waste items.

The success of this program will largely depend upon how much support it receives from the community. Community support for sustainable waste management and recycling will build if: 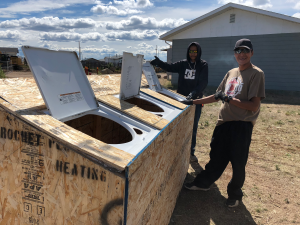 The staff and leadership of the waste and recycling initiative must work systematically to build awareness of what is happening, and explicitly show how activities embody the values of the community and contribute to the community’s quality of life. Some elements of the Plan that will help build awareness are:

Getting people actively involved will help to build a sense of ownership and connection to the Plan. A primary way to get people involved will be through community events like Spring Cleanups and Recycling Drives to collect specific recyclables and derelict appliances.

One of the first community decisions that needs to be made is a decision whether or not to have the Northern Store charge a 5¢ or 10¢ deposit on drink cans and bottles. This money would be given to the Waste & Recycling initiative, and then given back to anyone bringing in a drink can or bottle to the Recycling Depot or Transfer Station.